As you are probably aware, Ukraine is currently faced with a war ignited by Russia in its eastern regions. Russia supplies weapons and troops to its proxies who kill Ukrainians at their own soil. A year ago Russia annexed Crimea, a part of Ukraine that makes around 4% of its territory. It’s like Maine, South Carolina, West Virginia, Maryland, Hawaii, Massachusetts, Vermont, New Hampshire, New Jersey, Connecticut, Delaware and Rhode Island being seized by Russia in one go.

You should also be aware that the war Russia is waging in East Ukraine is often called a hybrid war where information and propaganda matter more than weapons. Of all the instruments to share information (or disinformation for that matter) among people, social media is known to be the most potent one. 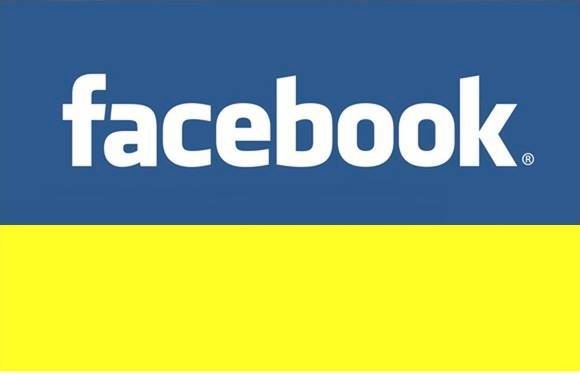 You may also be well aware of the Revolution of Dignity that embraced Ukraine last year and inspired millions to raise against Russia-backed authoritarian regime of the then President Yanukovych. For four long winter months people of Ukraine stood up to fight for their future and democratic values shared and cherished by the rest of the civilized world. Over 100 unarmed Ukrainian protesters were killed in Kyiv in those days.

The oppressive regime ultimately fell. Many believe it happened thanks, among other things, to Facebook and Twitter, which had become powerful tools in the fight for freedom, so powerful many claim it wouldn’t be possible without them.

For Ukrainian audience, Facebook has always been a platform where truth can be sought for and found, thoughts shared and discussed and many moves of civil society coordinated.

Last several months, however, the situation has radically changed to its opposite. Facebook has lost its well-deserved status of a place of freedom for Ukrainians.

While 2013 through 2014 just a handful, 5 to 7 Ukrainian public figures were ever blocked, now it is an ongoing flow. Tens of accounts of civil activists, politicians, journalists and even media outlets are being suspended on a daily basis.

An account of Hennady Moskal, a governor in Luhansk, area with the ongoing war, partly occupied by Russia-backed terrorists, was blocked. For Mr Moskal and his thousands of followers, Facebook was a precious tools to share breaking news on the situation in the region, lives of common people, and activities of both Ukrainian forces and the aggressor.

An account of Oleh Lyashko, leader of the third largest parliament party was also blocked.

Page of watcher.com.ua, a popular web portal engaged in analyzing propaganda on the web was permanently deleted.

An account of Andriy Bondar, a popular Ukrainian poet, columnist and activist, was blocked.

An account of Vakhtang Kipiani, a prominent public figure and editor-in-chief of Istorychna Pravda, a popular website was blocked.

An account of Igor Mosiychuk, a Ukrainian MP, was also blocked.

Also blocked within just last week were accounts of several other popular figures and activists.

Why could this happen? We believe the cause is simple. FB has a set of formal rules any violation of which could lead to blocking. If an organized group of users starts sending complaints against a particular user or his/her posts, the decision-making mechanism may fail. Formally, such group, if unidentified as such, acts in full compliance with the rules of FB, while, in fact, they abuse the rules. A person responsible for taking a decision to block or reject the complaint sees an avalanche of complaints citing would-be legitimate reasons for reporting. In many cases, it works. If number of similar complaints reaches some point, the user is blocked. We believe this is exactly the tactics used by the infamous Russia’s troll factories against Ukrainian civil society to silence its voice.

To illustrate more, the above mentioned Andriy Bondar was blocked for a post where he merely mentioned that another person had also been blocked.

Text on the screenshot: Wow! Evgeny Gendin has been banned. Dublin office got mad. Maskym Savanevksy, are these people from unban@uacrisis.org good? Can they help us?
Evgeny Gendin, cheer up. We are with you!

Another example. People were also blocked for an image of the XIXth century Ukrainian poet Taras Shevchenko. In those cases, nudity was specified as a reason for complaint. 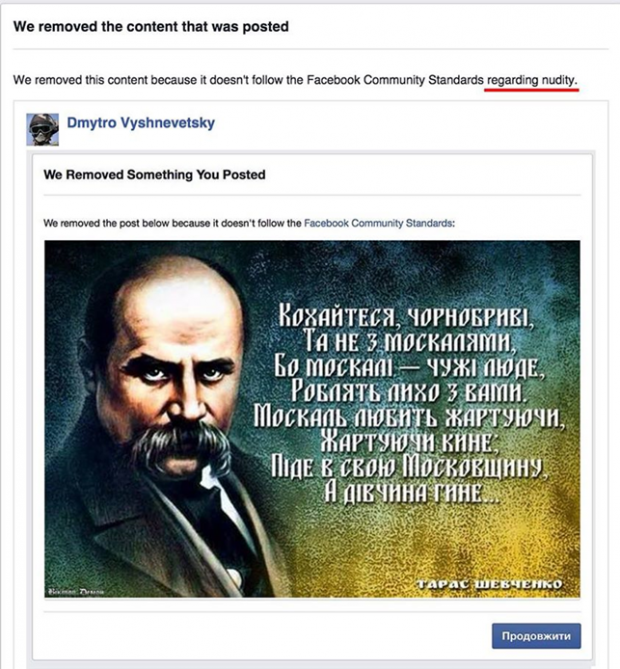 Over a dozen of Ukrainians were blocked for this photo featuring a daughter of the late Ukrainian soldier Andriy Matvienko. The girl received a state medal “For Valour and Bravery” for her father killed in a battle against Russia-backed militants. This photo for unknown reasons was also assessed as a violation of the FB rules: 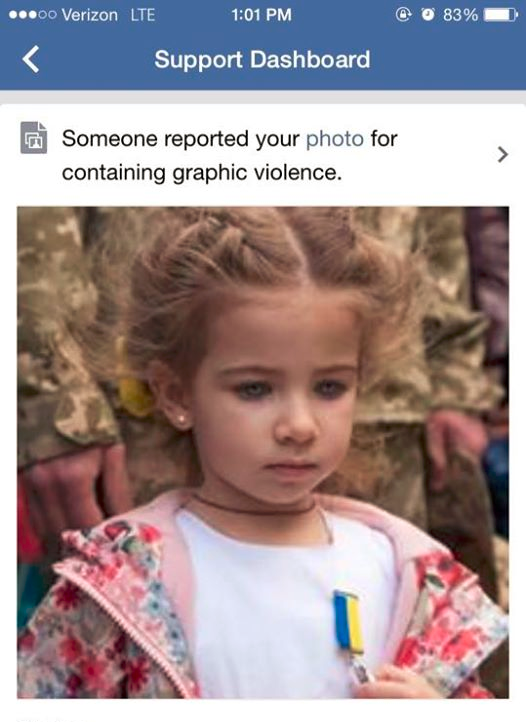 The photo depicts the girl with her father, when he was alive: 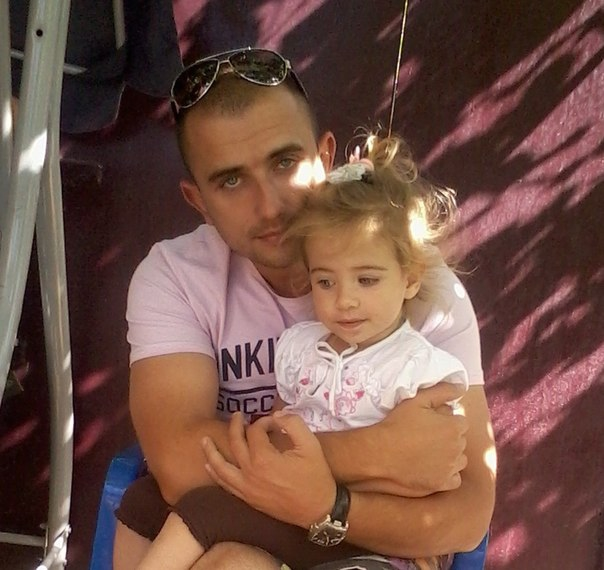 Our observations over the past few months give reasons to suspect that blockings have been organized and held by groups of people with a specific task of singling out unwanted users. Some accounts were blocked several times repeatedly. With each new blocking the person is being banned for longer periods – 7 or even 30 days until he or she is practically barnished from the FB community being unable to share information with his or her followers for too long. Exactly the aim the targeted attack was meant to reach.

Complaints of the above mentioned users on the improper blocking sent via a standard appeal form, got no response. The problem is aggravated by the absence of the Facebook support service in Ukraine. More than 90 countries, say, Swaziland with 160 thousand users on Facebook, or Malawi with 400 thousands users, have pages of FB regional offices. Ukraine with its multimillion Facebook audience has none. 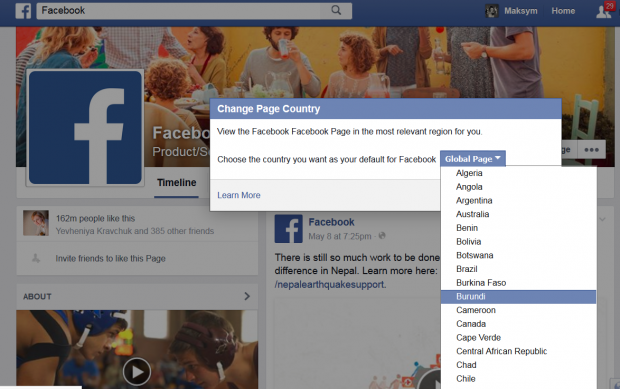 Many action groups in Ukraine urged Facebook administration to open a local representative office or select a person or entity to act as its official representative. So far, these requests remain unanswered.

We at the Ukrainian Crisis Media Center, a public initiative set up in March 2014 to provide the international community with unbiased information about events in Ukraine, have launched an emergency help desk for Ukrainian journalists, public figures and state officials who have been banned on Facebook. A week our help desk is up, and we have received 50 to 70 requests daily from Ukrainians who were blocked in Facebook without any viable reason. By our estimates, 1,000 to 1,500 Ukrainians are being banned in the social network daily, a catastrophic amount.

This catastrophic and unprecedented amount shows that Ukraine needs your special attention and assistance in establishing a rapid response to counteract this Russia’s special force brigade(s) on Facebook.

Your Q&A session is scheduled for Thursday, May 14. You might have already noticed the impressive number of questions from Ukrainians, asking you to set up a local representative office in Ukraine or somehow stop the process of mass banning of Ukrainian users.

One of the questions has gathered almost 43 thousand likes.

President Petro Poroshenko of Ukraine himself addressed you on the issue: 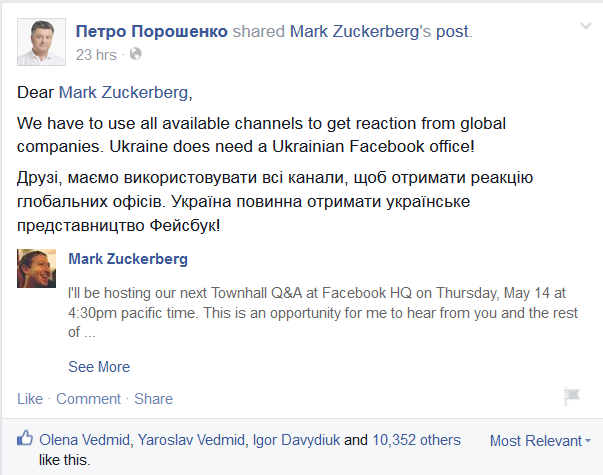 When war is going, lives of thousands of Ukrainians depend on information and the way it flows or doesn’t. Please be informed that over 7,000 Ukrainians have already died in that hybrid war in East Ukraine.